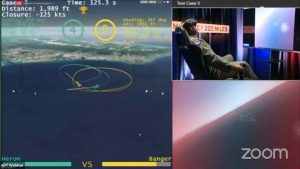 “The AlphaDogfight Trials is all about increasing trust in AI. If the champion AI earns the respect of an F-16 pilot, we’ll have come one step closer to achieving effective human-machine teaming in air combat.”

The Heron aircraft depends on a technique called deep reinforcement learning, which allows the program to repeatedly test-run multiple solutions to a given problem and study what works and what doesn’t.

The twisting methods adopted by the AI pilot made it difficult for Banger to match Falcon. After getting shot down the first four times, Banger hit speeds over 500 mph and then dropped the jet down to 13,000 feet. However, the F-16 pilot was unable to score a single hit due to the AI algorithm’s “superhuman aiming ability.”

Talking about the fight, the human pilot said, “Some of the rules and constraints that we normally apply to our human training environment weren’t there. So you saw the AI maneuvering to a position of advantage where it was able to use its more refined aiming technique with perfect information… Outside of that, it was very similar to what we see in our ordinary training in [simulators]”.

He also acknowledged the potential he saw in the AI’s algorithms. “If I were to walk away from today saying I don’t trust the AI’s ability to perform fine motor movement and achieve kills, I’d have a lack of integrity”, he added.

DARPA plans to convert the lessons from the AlphaDogfight Trials to the real world.

“There’s a long way to go. This was a far cry from going out in an F-16 and flying actual [basic fighter maneuvers],” Justin Mock of DARPA said. “But I think we made a really large step, a giant leap if you will, in the direction we’re going.”